Make trouble : standing up, speaking out, and finding the courage to lead

Cecile Richards with Lauren Peterson ; adapted by Ruby Shamir.
Author
Richards, Cecile, + more authors
Summary
To make change, you have to make trouble. Cecile Richards has been fighting for what she believes in ever since she was taken to the principal's office in seventh grade for wearing an armband in protest of the Vietnam War. She had an extraordinary childhood in ultra-conservative Texas, where her father, a civil rights attorney, and her mother, an avid activist and the first female governor of Texas, taught their kids to be troublemakers. From the time Richards was a girl, she had a front row seat to observe the rise of women in American politics. And by sharing her story with young readers, she shines a light on the people and lessons that have gotten her though good times and bad, and encourages her audience to take risks, make mistakes, and make trouble along the way. 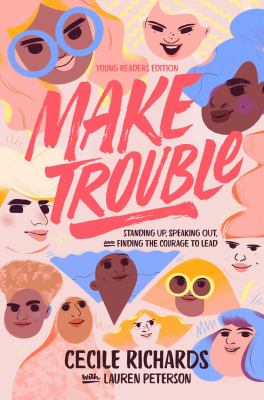